One idea that I have been wanting to try for several years now is the potato condo.  First encountered via my friends Shannon & Jason over at The Shibaguyz blog, I have seen them showing up online from coast to coast ever since.  This year I decided that the time has come for me to give it a shot.

Most potato condo plans I have seen are a relatively small footprint of about 2′ x 2’ and while that it fine and ideal for small space gardening, I wanted to go big and see just what this thing could do.  With that in mind, John & I set about building a potato condo that is 4’ x 4’ square.  When debating the best location for the structure we agreed that placing it in the center of the area that we recently began building up for erosion control was the best plan of action. 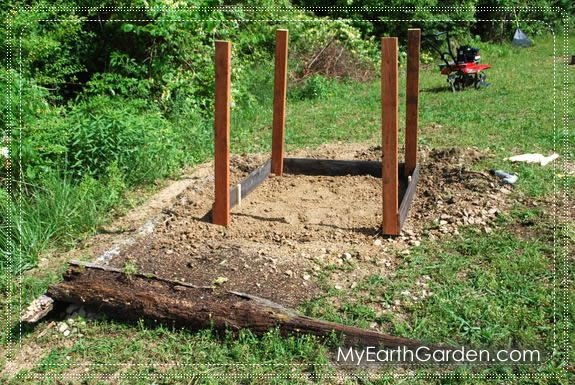 Let me answer the most common questions I hear about this really cool gardening method:

What is a potato condo?

In short, a potato condo is a method of growing potatoes above ground, in a container that grows as the tubers do.  Most structures are comprised of four posts and a succession of 2” x 4” slats that act as a raised bed would.

Why build a potato condo?

The most obvious reason for building a potato condo is that you can grow potatoes in a small area and because you are growing up instead of out, the footprint needed is much less.  In addition, you can grow potatoes in a potato condo without the need to till the soil below.  In fact, there doesn’t even have to be soil below – some people use this growing method on concrete!

How do I build a potato condo?

We thought we would just show a quick time lapse video of the process.  You can see the video at the end of this post.  Note that because we placed the potato condo on a slope, some tilling was necessary to level the ground beneath so that the structure was reasonably square.

The short version is that you affix a row of slats (in our case we are using old cedar fencing because it was available and cost us nothing) to 4 posts as if to create a box.  With that first row in place, add several inches of soil, compost, humus and/or manure to the box and level it out.

When it comes to placing the seed potatoes, I placed 14 seed potatoes evenly across a 4’ x 4’ space which might seem like a lot but remember, we are growing vertically and will be adding new growing space as the plants need it.

As the seed potatoes begin to grow, keep them well watered.  When the plants are about a foot long, it is time to add more soil / amendments.  I will be using a combination of chopped leaves, good quality soil, compost and manure, in essence creating a makeshift lasagna garden in the process.  As you add soil to the foot long plants, only cover about 4 inches at a time. As needed, add a row of slats to raise the condo.

At the end of the growing season, frost will kill the plants.  Then you wait a couple of weeks for the skins to toughen a bit and remove the slats from one side of the potato condo to harvest them.