A crisis can be an interesting thing.  It can also teach you a lot about people.

When I first got word that there was a rash of bad weather headed for the south I didn’t really pay all that much attention.  To be fair, in this part of the country we hear about bad weather so often that it usually doesn’t register that “oh yeah, they mean ME!” until the tornado sirens sound and you are scrambling to gather your family, your animals, your cell phone and – where the hell did I put those candles – sheltering in your safe place, if you even have one.

I was house sitting for one of my best friends while she was with her daughter as she had a baby.  I was there to take care of the cats, the fish and the 7 dogs, one of which is mine.  Then I was awakened just before the sunlight broke over the trees with a loud THUD! that shook the house. It wasn’t uncommon for a truck’s load to shift on the curvy road so I didn’t think much of it until the dogs began to whine.

Then I went to the front door.

The majestic oak that once shaded the house from just a few feet away was now flat on the ground, including the 13 foot wide root ball.  The massive tree took out the fence that enclosed one of the dog pens and three of the dogs were missing.

In full panic mode I began running around the rural area calling out for the dogs.  The first, Levi, was safely ensconced under the house.  The second, a precocious pup named Bonnie, was running around the field about a block away.  It wasn’t until after the sun was up that I found Jake, a black lab, about a quarter of a mile down the road.

When I got back to the house I snapped a few photos when I realized that this tree could have easily fallen the other direction – the direction it naturally leaned – and it would have fallen right across the bed I was sleeping in.  I lost it. 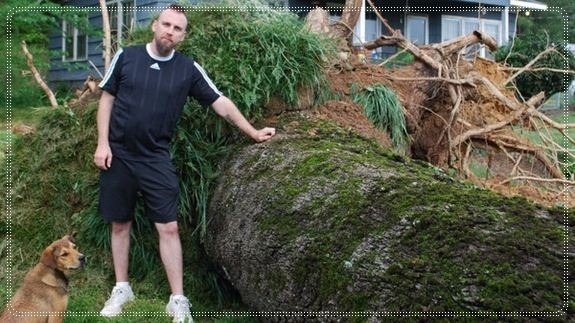 The animals were safe, so I could melt down without fear.  Unfortunately I didn’t have a lot of time; there were more storms – worse storms – on the way.

As I stayed glued to the television watching the storms roll in, watching live video of tornadoes touching down and creating paths of destruction, I realized that I was not prepared for this.  I was in an old house with three more oaks that could easily crush it and the “safe place” was the hallway that wasn’t safe at all.

Then a mile-wide twister destroyed Tuscaloosa and made a direct path toward me.  As debris from as far away as 60 miles to the west began to litter the sky over the house, I lost power and cell phone service. I knew that the next city was without power from the morning’s storms already. I was cut off.

Beyond nervous to the point of nausea, I fed the dogs and began to clean the kitchen with what remained of the daylight coming in through the windows.

It is now noon on the following day. At 8am I fed the dogs and left the house to find somewhere I could connect to WiFi and let my friends and loved ones know that I was okay. The power was out for as far as 20 miles away but I drove to the other side of the county and now sit in a Books a Million store in Trussville, Alabama.

I am in awe of the sheer number of messages, email, texts, phone calls… from all over the world. There are so many that I can’t even respond to them all individually and yet they gave me a momentary pause and some much-needed perspective.

I’ve been feeling sorry for myself a lot lately, truth be told, and the past 32 hours have given me a clearer mind than I have had in a long time.  Things don’t matter.  Even items with sentimental value don’t matter when you realize just how close to death you can be at any given moment.  I didn’t once worry about saving anyTHING yesterday. I checked and re-checked on the people and the animals, but then again my compassion for the living is sometimes my strongest weakness.

I sat in the glow of an antique oil lamp while I watched the sunlight break over the trees this morning.  I still had no idea of just how widespread the damage and the death was, but I prayed.  I prayed for people that I know and for those that I don’t. As I prayed I was flooded with the memories of my time working the Red Cross Disaster Relief shelter in Birmingham in the wake of Katrina and though the extent of the damage wasn’t anything so severe, for 24 hours – in my mind and my heart – it was no different.

If you aren’t living like you were dying, then you aren’t really living at all.