Ever since childhood I have had one true love from the garden – tomatoes.  In the interest of full disclosure there isn’t much from the garden that I don’t adore but tomatoes grow at home have a noted advantage over anything you can buy in the supermarket; it’s called taste. 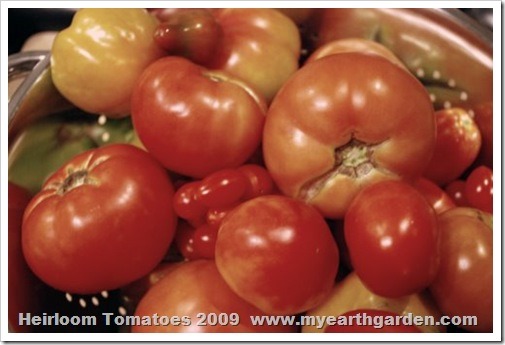 After a recent trip to Portland I returned home to a huge number of my beloved heirloom tomatoes ready for picking even after asking neighbors to take whatever they could use.  The colander was overflowing with gorgeous ripe heirloom tomatoes from six different varieties and I was ready to make sure I didn’t lose a single one!

One particularly beautiful specimen was sliced and found its way onto our breakfast plates this morning while the rest (as seen in the photo above) were chopped and pureed, combined with a healthy bunch of fresh picked herbs, peppers and onions and are now simmering the rainy afternoon away in my crock pot.

There are lots of recipes and schools of thought about how to make this or that the right way but to be honest I am almost entirely self-taught in the kitchen and I have discovered that the only right way is the way that works best for you.  If you are the type who feels more comfortable following recipes to the letter then by all means, do it!

I tend to be the look-cook-taste type, meaning that I look at a recipe to see what the general ingredients list is like then I combine the ingredients my way, tasting as I go and adding a bit more of whatever my taste buds tell me is called for.  That said, here are the ingredients in my crock pot tomato sauce and the general guidelines for how I make it happen:

INGREDIENTS (give or take)

First let me say that I don’t remove the skin or the seeds from my tomatoes because I puree them in my Vita-Mix and by the time they make it to my crock pot or sauce pan there is most often no indication of skin or seeds.  Even when I make salsa I leave the tomato skin and seeds intact.

That’s really all there is to it, folks.  You can then let the mixture cool and can it or pour it into large zipper bags and freeze it for an ultra-fast meal in minutes anytime.

Wanted to do a quick update to give you a glimpse of the finished product.  First, here is the sauce while it was cooking down in the crock pot after about 12 hours: 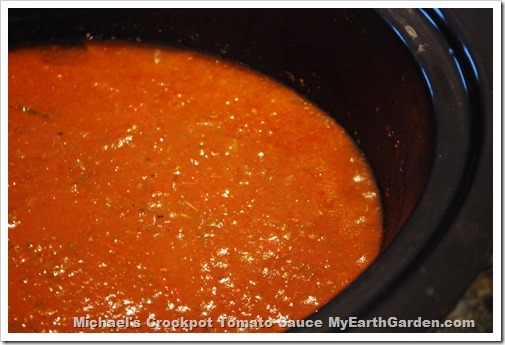 Next post: Simple Homemade Laundry Detergent Powder for 7.5¢ Per Load