To you, this may just be a pile of pine straw, but there is more to it than that. 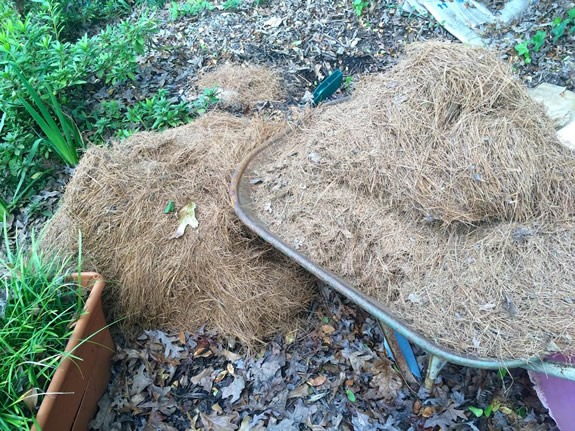 “The duty of helping one’s self in the highest sense involves the helping of one’s neighbors.”   Samuel Smiles

At this time of year my property is covered with oak leaves from very old neighboring trees, which I shred and use as compost. There are a lot of leaves, and the recent extended wet spell means I need to let them dry out before I can shred them.

While out tackling the leaves this morning,  I noticed recently that the neighbor across the street has a pine tree that has covered his yard with pine needles. If left to pile up, pine needles can become quite slippery, and they were making the sidewalk quite dangerous for passersby.

When I noticed the neighbor leaving for work, I offered to pick up the pine needles from the driveway and sidewalk. When he looked at me like I was from another planet, I explained that while I was doing him a favor, he was also doing me one.

With temperatures beginning to tease their way near the freezing mark, I am working in earnest to get the perennials tucked in for the long winter’s nap. I like to put down a thick layer of shredded pine needles around the base of cold sensitive perennial plants like my BrazelBerries® blueberries, my blackberries, and even the grapes.

Contrary to popular belief, pine needles do not raise the acidity of the soil, but that’s not why I use them. I like pine needles as mulch – especially after I have picked them up with my leaf blower vacuum attachment so that they’re slightly shredded – because they interweave tightly and create a more secure barrier against the cold. That interweaving feature makes pine needles a great option for slopes, too.

Half an hour later, I had four loads of free pine needle mulch, and my neighbor had a cleaner, safer yard and sidewalk. I’d say that’s a win for everyone.

You never know what a small act of kindness might do for someone. Seize every opportunity you can to make the world a little better for those around you.

Next post: The DIY free clothes folding tool that saved my sanity