Poverty In My Back Yard 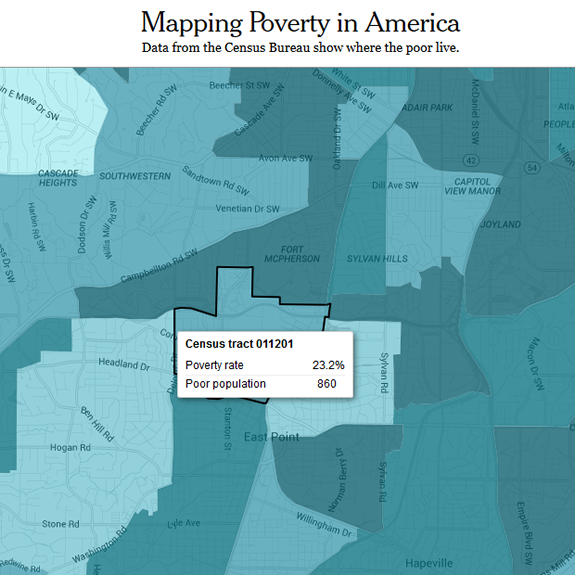 Using the interactive Mapping Poverty in America map provided by the New York Times, I learned that the neighborhood I call home has a poverty rate of 23.2%. That’s a fraction under 1/4 of the population. As if that wasn’t bad enough, I am less than a 2-minute walk from an area with a poverty rate of 47.7%, and areas that are lower than 23% are the exception in my area. In 2012, to qualify as being impoverished, a family of four could make no more than $23,283, while any individual under the age of 65 could make no more than $11,945. 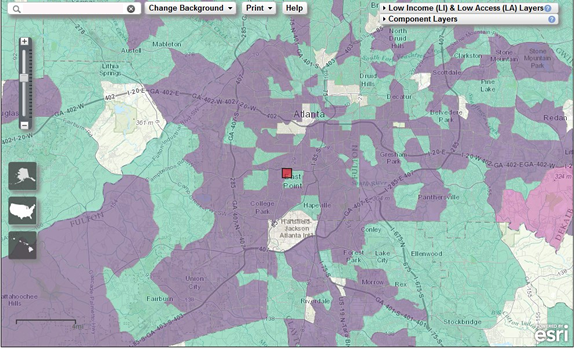 This map from the USDA Food Access Research Atlas using census data shows two things: tracts with over 100 households without vehicles (purple) and tracts with over 33% of households that are 1/2 mile or more from a grocery store (green). For clarification, everything that is marked purple is also green.

“Food deserts are defined as parts of the country vapid of fresh fruit, vegetables, and other healthful whole foods, usually found in
impoverished areas. This is largely due to a lack of grocery stores,
farmers’ markets, and healthy food providers.” –USDA

The nearest grocery store is 2 miles away from my address and it lacks decent fresh produce on a good day. The nearest food options that are 1 mile or less are fast food chains, neither of which would be classified as a grocery store, farmers’ market, or healthy food provider. If I didn’t have a car, I would be limited to the use of mass transit. As you can see from the image above, that trip via bus would take about 30 minutes, not including the time it took to walk to the bus and wait on the bus (both ways). Don’t forget that you’re riding the bus, so you can only buy what you can carry. And if the weather is bad or the bus is just late? Sucks to be you.

I share this information so that people will have a better understanding as to why I am a gardening and healthy food advocate. You don’t have to go to third world countries to see people starving to death. Right in our back yard children are suffering from obesity and malnutrition at the same time because they are surviving on a diet of prepackaged and drive-thru meals that are more filler than actual food.

In 2015 I will return often to these topics because as a society we need to know what is causing the issues of the day. Without many exceptions, it can be traced back to poverty and food insecurity. This year I promise to work harder than ever to research and offer solutions to these issues while teaching a new generation the many benefits of growing your own food. I promise to bring that information not just to the readers of this website, but also to my neighbors – the people in my back yard who are living in poverty.

There is something I can do, and I’m not going to stop until I feel as though I have done it.