In case there was ever a question about our sanity, last night’s conversation would have answered it loud and clear. Barely halfway through this month and John brought up the possibility of another food challenge! Lest you think that he was the only crazy one, I agreed with him and we’re already planning for next year.

I’m going out on a limb here to say that my personal belief is that any program that uses the words supplemental and nutrition in its title should in fact limit the scope of the items eligible for purchase using its benefits. When it comes to a government funded program aimed at curbing hunger, all the more reason to reduce support for such things as snack cakes and junk food while increasing support for whole food items like produce, meat and pantry staples such as flour, meal, eggs, milk and the like.

When I gave the short talk “HELP! We’re Fat and Starving to Death!” I pointed out just how far we have gone from eating wholesome foods to barely surviving on junk food while suffering from malnutrition and obesity at the same time. This is one area in which the government  could do the right thing by the American people and truly impact a large portion of the population, encouraging them to eat a healthier diet and lowering health care cost at the same time.

Yes, such limitations would in essence mean that the government was controlling what you could buy with SNAP benefits, but it is called the Supplemental Nutrition Assistance Program, not “Michael’s Twinkie Fund”. If Yum! Brands (home of Taco Bell, Long John Silver’s & Pizza Hut) have their way though, you’d be eligible to use food stamps to buy fast food. My favorite quote from that article though has to be this one:

“If the pie’s only so big, nobody’s going to want to see the pie sliced thinner,” said Convenience Stores spokesman Jeff Lenard. “I’m not sure that’s in the best interest of public health.”

While I may have personal issues with the company, Walmart’s new and much-hyped ad match policy has been a joy to take advantage of during this challenge. With a single exception there have been no problems whatsoever. An interesting interaction during yesterday’s checkout though; when I handed the cashier my coupons at the end of the transaction, she said that they now need them to be scanned along with the item they are to be used for. I’m not sure if that’s a corporate policy or one that is specific to our store, but if you shop there, it is something to check on.

Walmart truly makes ad matching easy though, and their corporate policy is that you don’t even have to bring the ad with you to get the lower price, though I always carry my competitor’s ad along with a printed copy of Walmart’s coupon policy, just in case.

BREAKFAST NOTE: A last minute doctor’s office visit threw off our eating schedule for the day and we missed breakfast.

LUNCH NOTE: We have noticed that not only is the price of baking bread at home cheaper than buying it premade at the store, we end up getting more slices out of each loaf. The previous two homemade loaves have yielded 4 more slices each, plus the ends were used to make breadcrumbs that supplemented our recent burger dinner. 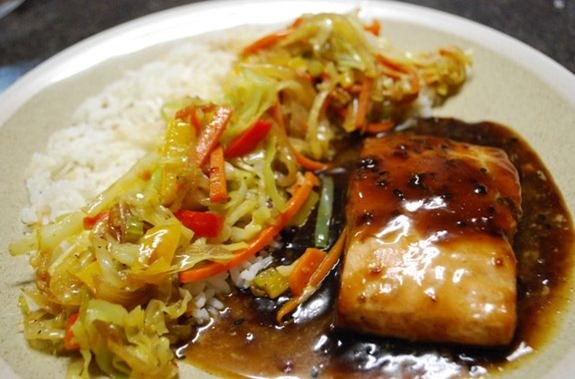 DINNER NOTE: The salmon filets were pre-seasoned and found on clearance. It gave us the perfect opportunity to use leftover rice and sautéed peppers along with some cabbage, carrots and onion and believe it or not, the stir fry itself was the star of this show! We both said that we would gladly repeat it for lunch, and that’s a meat-free meal. 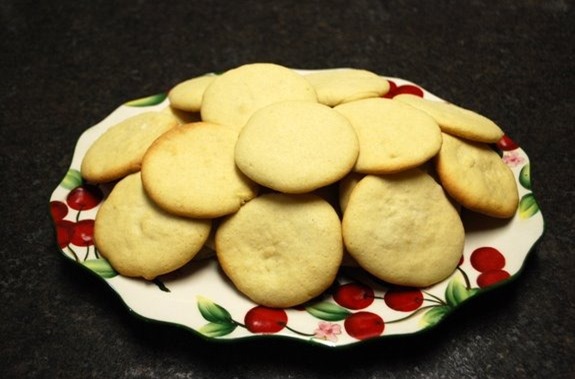 COOKIE NOTE: We’ve had desserts a couple of times so far, but nothing that has been more snack-like. This very basic cookie recipe came from an old cookbook that John wrote about in March. As it turns out, the cost breakdown is barely 2¢ each, so even a big snack of half a dozen cookies is just 12¢. Pretty sure that you’ll never find a dozen made from scratch cookies for 71¢, much less three dozen.

QUESTION OF THE DAY:
What would you think if there were stipulations on food stamps that gave extra incentives to those who used their benefits to purchase non-convenience food items? For example, someone who purchased flour, sugar, eggs & butter as opposed to a bag of cookies or snack cakes or whole chicken instead of a frozen dinner.

Next post: Why We Are Doing the Food Stamp Challenge