It happened while we were in the throes of canning the first tomatoes of the season.  That part won’t surprise anyone who has ever had a completely kickass idea at the most inopportune time possible much like the funny quip you know you’re doomed to forget because you can’t find a pen.

We looked at the compost bowl full of tomato skins that had just been liberated from their innards and wondered aloud if there was a way to make them useful rather than just tossing them into the compost tumbler.

That’s when the wheels started turning and an idea was born. We were going to turn tomato peels into tomato paste!

The idea isn’t as crazy as you might think, but because genius is oft misunderstood, I ask only that you read on to see just how amazing it really is.

We started with a bowl full of tomato peels (see photo above) that had just been removed after a 60 second dunk in boiling water.

HINT: If you are canning tomatoes, use a sharp knife to cut an X through the skin on the base of the tomato. The skin will slide right off after blanching.

Then we placed the peels skin side down evenly on the trays of a dehydrator, turned it on and let the magic happen until the skins were completely dry.

The dried tomato skins take on a beautiful hue that reminded me of the tissue paper flowers I made in grade school.  They are beautiful and quite fragile.

Thankfully I had no intention of keeping them intact so I peeled them away from the trays and collected the dehydrated tomato peel in a container to prepare for the next step in the process. What’s the next step, you ask? Don’t get ahead of me, I’m trying to tell a story here.

When I crumbled the dried peels, they started to resemble fish food flakes which doesn’t really mean anything other than I thought it was pretty cool. Don’t judge me.

When all of the tomato peels were collected from the dehydrator they were ready for the final stage of this journey in which I pulverized them into an aromatic and colorful powder using the trusty Magic Bullet. I could have used my beloved Vita-Mix, but there wasn’t enough to warrant getting out such a large piece of equipment.

A quick whirr in the Bullet was all it took to transform these tomato peels into something that you wouldn’t recognize at all.

From the looks of things, this experimental idea is going to do what we had hoped, but there is only one way to be absolutely sure.  I measured out a teaspoon of my tomato powder into a ramekin and added an equal amount of water. When I stirred the mixture together well, I was left with exactly what I’d thought I would have.

Now I have a secret weapon in my cupboard. I can make tomato paste on the fly in any amount I need without having to open a can that I might not be able to use all of. We have used the entire tomato and created something useful and money-saving in the process. For those curious about the flavor, it tastes exactly like tomato paste and because it is dehydrated, it is completely shelf stable. 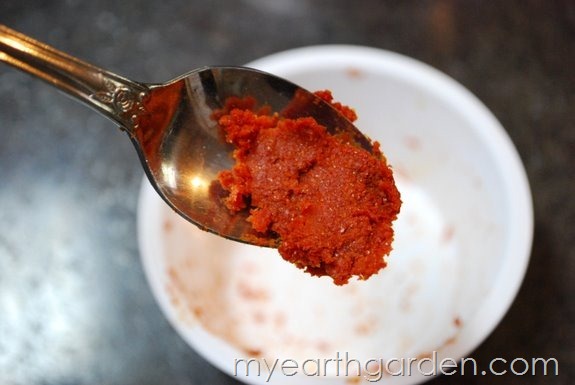 In the future we plan to use the idea to make seasoning mixes as well.  We will follow the same process stopping short of creating a powder.  By leaving the dried tomato in tiny flakes we can then mix them with sea salt, basil, dehydrated onion, garlic, and a host of other goodies to create one of a kind flavor mixes that will be ready in a shake.