For as long as I can remember I have loved pickles.  Sweet, dill, it doesn’t matter so long as I have them around.  Given my penchant for doing things myself I am sure you will understand when I explain that store bought varieties just don’t cut it for me anymore, but at the same time traditional pickling methods are time intensive both for making pickles and for waiting on them to… well, pickle.

A few years ago I came up with a great way to make quick pickles in the refrigerator in about 24 hours and I am finally ready to share it with you.  Bear in mind that any measurements are only going to be estimates as the exact flavors will vary depending on your cucumbers, your vinegar and your personal taste. 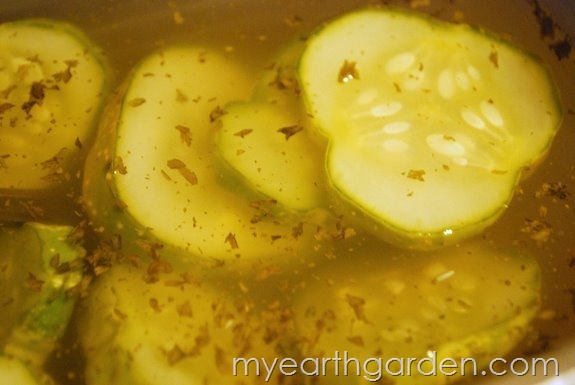 Always start with fresh picked cucumbers.  If you are purchasing them, do not go for the large variety with the thick, waxed skins as the flavors will lack the depth that this recipe really calls for.  Wash and cut the cukes into slices of about 1/4 inch each.  Put them into a bowl and sprinkle liberally with sea salt, not that iodized crap.  Leave the cukes to sweat for about 20 minutes while you put together your brine.

Here’s where the measurements get estimated, so keep that in mind as we go.  The amount of brine you need is directly related to the amount of cucumber you have to work with and because I often only have 3-4 at a time, it changes.

The liquid is made up of equal parts apple cider vinegar and water.  To that starter I then add sugar at an approximate rate of 1 Tablespoon per cup of sliced cucumbers. Minced garlic, black pepper and dill are then added to taste.  For 2 cups of brine I will add about 1 Tablespoon of garlic, a few shakes of fresh ground black pepper and 1 teaspoon of dill.  Stir or shake the brine until the sugar is well dissolved.

Place the cucumbers any the liquid they have released into a resealable jar or other container.  Pour the brine over them to cover and then put the lid on the container.

Refrigerate for at least 24 hours before you give them a taste and then see how long they last!

Previous post: Back To Basics 101: Simple Tips for Saving Money on Food