Why I Pee On My Tomatoes (and you should, too) 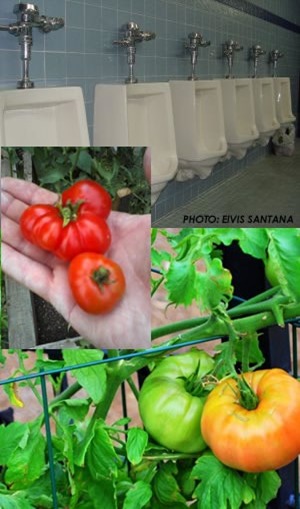 When I first read the article on the Science and Development Network I was sure they’d been hacked, but as I read on I started to understand that the simple idea was so crazy it would probably work.

Since the experiment would not cost me anything at all and in a roundabout way was going to save money, I got started immediately.

The article, posted on September 9, 2009, is called “Tomatoes thrive on urine diet”.  As mentioned before I was simultaneously skeptical and bemused by the titled alone until I began to see the science behind the claim and the simple, painless way that I could try it out for myself.  I have been a proponent of peeing on my tomatoes ever since.

Now for those about to tell me how gross I am and how you will never eat one of my tomatoes, I have three points to make:

Studies have shown that the yield can be as much as 4 times as high and that the quality (and safety) of the produce is not compromised in any way.

In the study “Stored Human Urine Supplemented with Wood Ash as Fertilizer in Tomato (Solanum lycopersicum) Cultivation and Its Impacts on Fruit Yield and Quality”  in the August 2009 edition of the  Journal of Agricultural and Food Chemistry, various combinations of human urine, fertilizer and wood ash were used.  Results and details about the study can be seen here.

My own experience has followed closely with the results of the study.  Here are the high points:

Between the two of us we don’t pee enough to sufficiently water all of our tomato plants, but by supplementing the regular watering schedule with our own homemade nitrogen, phosphorus and magnesium solution we are adding nutrients to the plants that will add nutrients to us later in the season.  Do I expect that everyone will be so evolved as to “lower” themselves to collect their own urine and use it to water their tomato plants?

I can only hope.