When John brought home a Black Pear Heirloom Tomato seedling from a trip to Virginia a few weeks ago I was intrigued.  I’d never grown the variety before but even more surprising, I’d never tasted it.  After doing a bit of research and reading comments from home growers around the country I anticipated the first ripe fruit more than ever. 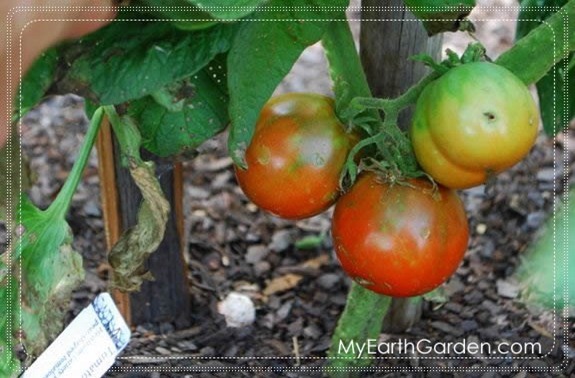 I should state at the outset that in all my years of growing heirloom tomatoes, the seedlings purchased from Amish growers have always performed well even when conditions were less than favorable.  This is an Amish heirloom variety so I had high hopes for production and have not been disappointed.  The tomatoes in the photo above were the first to ripen on the vine and were ready for picking yesterday evening. 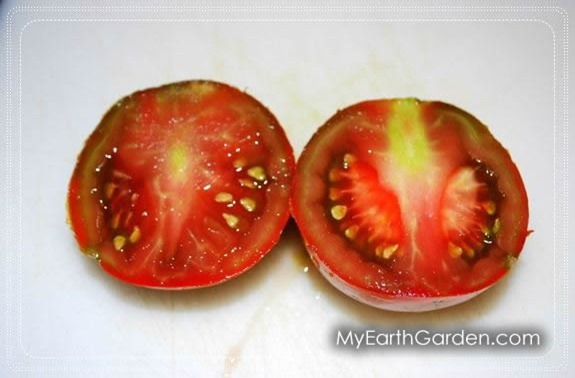 The first tomato from the black pear plant measured about 3” across.  The flesh was not as dark brown as many of the reviews I’d seen but based on feel I could tell that it was ripe and ready for picking.  Upon cutting I could see that this small tomato produces plenty of seeds, so seed saving should not be an issue and there is a good amount of juice.

When it comes to flavor, this was the main source of my intrigue when it comes to the black pear tomato.  Many seasoned home growers have referred to it as too spicy, flat, bland, even bitter and “foul”.  These are not terms that I have ever associated with a tomato personally so I was looking forward to a fruit that was so far removed from my comfort zone.

I quartered the tomato and John & I each tried a quarter fresh from the vine.  We agreed that the flavor was far less acidic and powerful than the majority of home grown tomatoes that we have experienced, but neither noted any bitter or spicy tones at all.  The second quarter was lightly salted and we tasted again.  A world of difference a touch of sea salt makes!  The flavor was bright, even slightly sweet and definitely not something that either of us would classify as “foul”!

The verdict after our first tasting is that we are looking forward to adding the Black Pear Heirloom Tomato to our summer salads.  We aren’t sure how it will stand as a preserving variety but we have plenty of those on hand so it isn’t a concern.

Previous post: Why I Pee On My Tomatoes (and you should, too)