Set Sail for Hudson North Before This Star Disappears For Good

In what should by all accounts be a prime corner location at Atlanta’s popular Atlantic Station you’ll find an unassuming food destination like no other in the metro area. The entrance to Hudson North isn’t flashy, in fact it is pretty low-key. Nothing more than a sandwich board to woo you in, while on the windows you can read an explanation of what awaits you inside.

Hudson North just opened on October 9th of this year and they have no intention of existing at all after December 31st. The brainchild of Cypress Street Pint & Plate owner Billy Streck, Hudson North is Atlanta’s first taste of a movement that is gaining momentum across the country called pop-up restaurants. Don’t let its temporary status fool you though; as soon as you walk in you get the inviting, chill vibe of a neighborhood hangout where “everybody knows your name”. It’s hard to believe that the entire concept came together and the doors opened in less than a month. 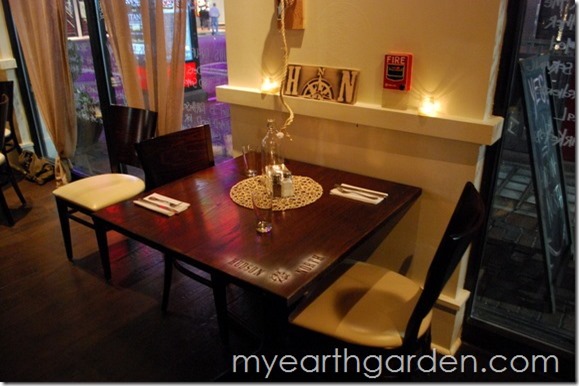 Last week I had the opportunity to visit Hudson North, sample their wares, and sit down with Billy Streck to find out more about the philosophy behind his latest business venture. The name is an homage to his beloved New York, where Streck lived north of the Hudson River before relocating to Atlanta to start a family with his wife Jenn, an Atlanta native.

To stand at the helm of his kitchen, Streck brought in West Virginia native B. H. Hibbs, known lovingly as “Chef B” to take the lead in creating a menu that would be local-centric and farmers market-fresh. The true secret to that freshness, I learned, was that the ingredients are purchased at local farmers markets the day they are prepared by the chef himself.

But enough with the small talk, I was ready to see what the chef has to offer: 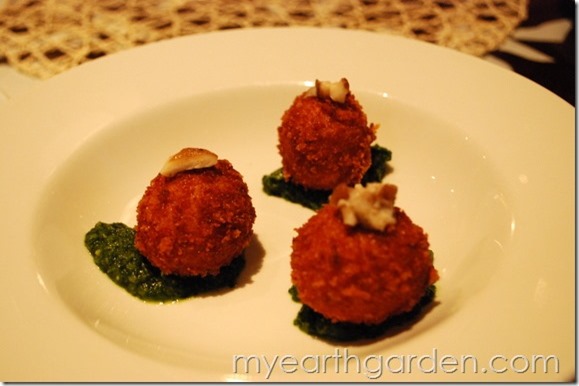 The appetizer on this visit was a trio of Ricotta-Parmesan Fritters served over asparagus puree and capped with pickled mushrooms. They resembled upscale hush puppies on first glance, but appearances can be deceiving. These puppies are loud and proud, and they have a bit of a kick to boot. Honorable mention goes to the puree which is surprisingly delicious and flavorful enough to stand alone.

On this visit I sampled three entrees: scallops, seared tuna, and pulled pork. 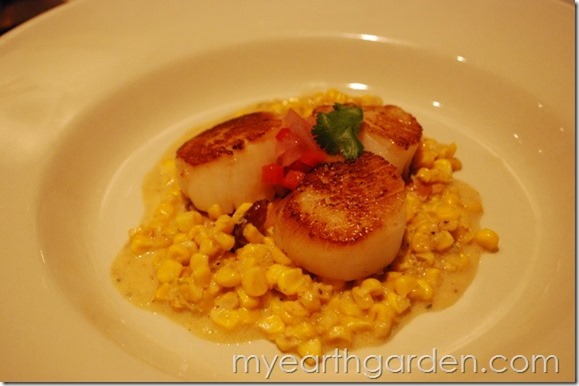 The Scallops are served over a bed of creamed corn and bacon, topped with pickled chiles and red onion. The scallops were seared to perfection and not a second longer. I’m not particularly fond of scallops and even I enjoyed them. I start to sense a theme when I notice that the bed component of this dish – creamed corn with bacon – is as surprising as it is tasty. Take everything you think you know about creamed corn and toss it out the window, because this version is like nothing you’ve ever tasted. 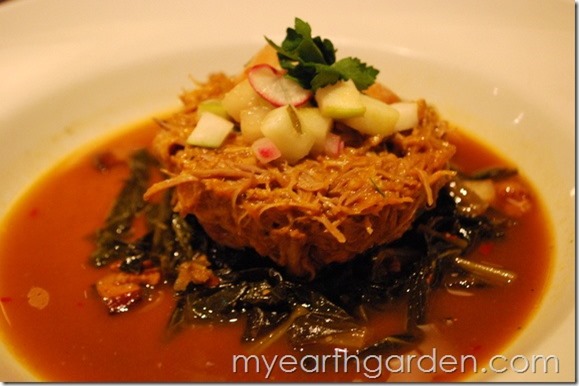 Next up was the Pulled Pork. Let me preface this by explaining that I cannot eat commercially-processed pork because of the nitrates and preservatives, but thanks to Chef B’s dedication to quality and local shopping, I was lucky enough to indulge in this case. The pork is served in a mustard sauce, over spicy collard greens, and topped with an apple-pear relish.

The results are nothing short of amazing. There’s some serious spice going on here, but it is worth every bead of sweat. 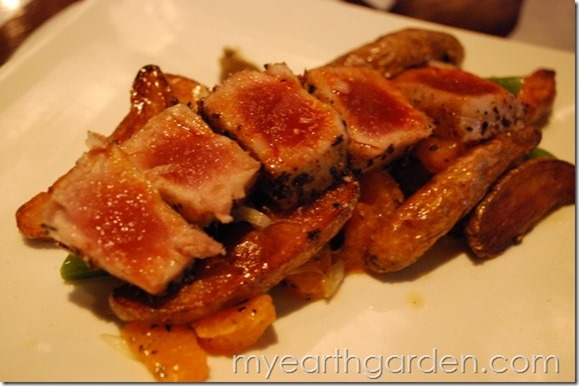 he third and final entrée from this visit was Seared Tuna with fingerling potatoes, snap beans, clementine oranges, olives, fennel and a lemon-honey vinaigrette. The tuna was the standout masterpiece of this visit, one again winning over my anti-fish partner, and with good reason. The sear was impeccable, the seasoning strong without overshadowing, and every bite as tender as the next. 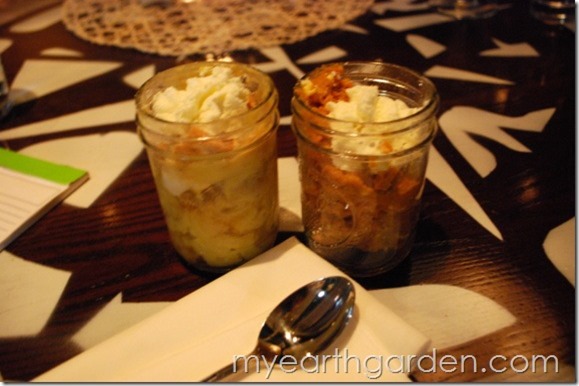 Desserts are served in small mason jars and while the deconstructed look may detract from their visual appeal, it doesn’t hurt the flavor one bit. We sampled apple pie, pumpkin pie and banana pudding and enjoyed their simplicity.

I did not exaggerate when I told my partner that Hudson North is my new favorite Atlanta restaurant. My only regret is that this culinary love affair will be so short-lived. The menu changes along with seasonal availability. This pop-up is an inviting and welcome addition to the corporate food environment of the area.

In short, get to Hudson North before it’s too late. This is an experience that you won’t forget.