It used to be simple. If you wanted a drink you would go to the bar then stumble to White Castle or Taco Bell on the way home at 3am when your food cravings were stronger than your better judgment. Then they had to go and start this newfangled thing called a gastropub.

What’s this, you say? A pub serving food that doesn’t start in the freezer and end in the deep fryer? You might be as skeptical as I was when I visited a neighborhood bar in the heard of Atlanta’s Midtown District called, creatively enough, Midtown Tavern. 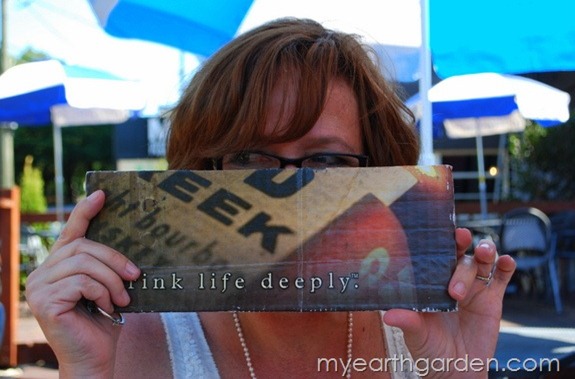 Fresh on the heels of our visit to Atlanta Botanical Gardens earlier that morning, fellow foodie and food writer Carolyn Binder and I stepped through the unassuming doors at Midtown Tavern just as the staff was getting the place ready to open. In a moment we found a comfortable spot on the patio where we could enjoy the unseasonably beautiful day while fully experiencing the wares of Midtown’s Executive Chef Hunter Keels who left the kitchen just long enough for introductions.

On this day, Chef Keels offered to give us a taste of what many midtown Atlanta regulars enjoy 7 days a week as he gave us a culinary tour of the daily special menu at Midtown Tavern on June 2nd, 2012.

Having worked in the service industry both as a server and a bartender, I have to start by mentioning Bobby. This guy is everything you want in a server no matter where you are. Personable, engaging, witty, and pretty darned good looking to boot, Bobby didn’t miss a beat when I was indecisive about my beer choice and suggested a local brew called Monday Night’s Drafty Kilt that did not disappoint. A good server keeps your drinks full. A great server knows the food and drinks and doesn’t miss the chance to showcase both.  Big kudos to Bobby for showing how it’s done. 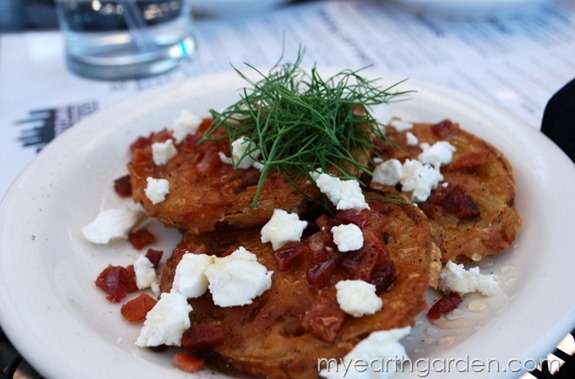 Within moments our appetizer of Fried Green Tomatoes arrived. Let me preface this by saying that I am such a fan of this southern favorite that I included my own personal recipe in I GARDEN: Urban Style and I’m a little picky when people make them more complicated than they should be. Chef Keels brought together fresh tomatoes, honey, goat cheese, fennel and locally-sourced and house-cured bacon to create his version. The most complicated thing about this dish was deciding who would get the last bite.

While we were doing this review and interview, a table of 5 or 6 seated themselves just next to us. When they were wondering aloud about the appetizer choices, we suggested the Fried Green Tomatoes. Within seconds of the dish arriving at the table, we overheard “How many of these did we order? We’re gonna need more.” 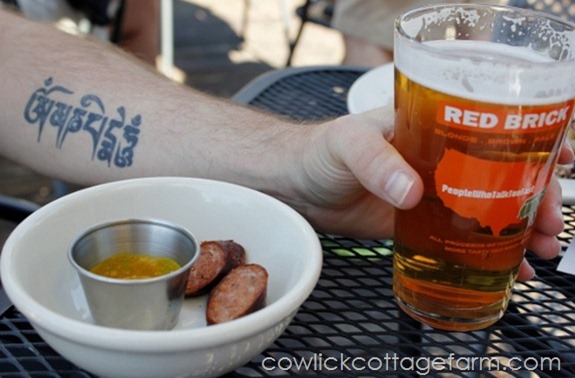 As impressed as I was with the delicious sampling of daily specials, I have to admit that what impressed me most about Keels’ food was the sheer number of everyday items that he makes in-house. The chef at this bar (I had to keep reminding myself I wasn’t in a fine dining restaurant) not only cures his own meats but also makes his own kielbasa (photo above) along with house-made ketchup, mustard and pickles. In a bar.

Our sampling that day also included:

I’m not going to give away too much about the complete experience here on the blog because Carolyn and I are working on a piece for the next issue of GrowWrite! that will go into much more detail. One thing I want to get across right here and now is that Hunter Keels loves food. He knows food. He knows and enjoys the delicate art of combining flavors so that each bite is an experience.

Whether you’re in it for the drinks, the people or the food, the next time you find yourself in Atlanta, you need to stop by Midtown Tavern for a drink from some of the best servers in the biz, a game of cornhole on the patio with friends and some of the best food in Atlanta. Tell them Michael & Carolyn sent you, or better yet give me a call and I’ll meet you there.