It didn’t take long for several of you to know exactly what I was up to in yesterday’s Super Secret Recycling Project so I wanted to share a bit more in today’s post.

After cutting up the first shirt as I showed yesterday and winding it into a ball, all that was left was teaching myself to crochet well enough to create an old school crocheted rag rug.  In order to make this possible I needed a very large crochet hook so that meant buying a plastic one last night.  While that goes against limiting our plastic use, I take solace in the knowledge that this was a purchase that will stay close, be used often and be used for a long time to come. 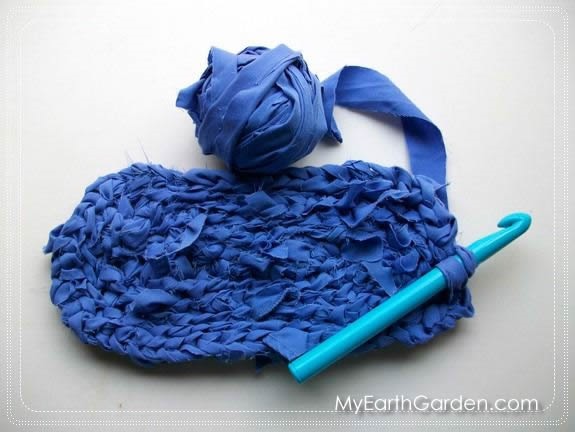 I really didn’t think I was going to be able to pick up the basic crochet stitch fast so I thought getting started on this rag rug was going to take some time.  As luck would have it, I was wrong.

This morning over a cup of coffee, I loaded YouTube and we watched a couple of short video tutorials. In no time at all, I was off and running and what you see in the photo above is what I was able to accomplish – starting from zero knowledge – in two hours.  While I didn’t put anything in the photo for perspective, I measured the piece as pictured and it is 5” wide by 12” across so far.

Once I finished the starting chain and began connecting back to it, the rug started to take shape. Once I had made my first full loop I was getting excited by the creation taking shape in my hands. I quashed the knee-jerk reaction that told me to incorporate another color because this rug started out as a way to make use of six old work shirts and I want to see that original idea through.

I could have trimmed the rag yarn so that the big ends weren’t sticking through but I really left them there intentionally hoping that they would add to the homemade character of this project.  I’m truly happy with the progress so far and look forward to doing more.

We have already lined up another rug project idea to work on next!